Via the magic of WordPress, I can write about Kim’s surprise birthday present without worrying about spoiling the surprise. How cool is that? 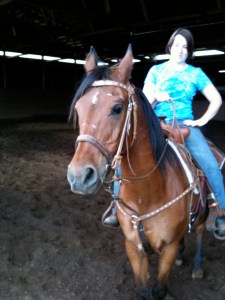 Bob during his pre-sale test ride with Kelsey, my riding instructor

After almost a month of hemming and hawing (on my part), second guessing myself, and negotiating with the seller, I took the plunge and picked up Kim’s present today with the help of my friend Mary and her trailer (thanks, Mary!).

His name is Bob (and no, I didn’t name him that). He’s a 14.2 hh 22-year-old Arabian gelding (pedigree name is PA Protege) who has pretty much been there, done that—perfect for a beginning rider like Kim. Many thanks to Kelsey and my friend Jill for helping to test ride him (I am too big for him to carry comfortably).

I bought him on a three-day trial, with the plan being for Kim to ride him tomorrow as her “new lesson horse” that Kelsey is trying out. (Kelsey has been awesome in all of this—thank you!) If the lesson goes well and Kim likes him, I’ll tell her after her lesson that she gets a pony for her birthday.

Sentiment aside, it is generally a good thing to look a gift horse in the mouth. Bob got a pre-sale veterinary exam today from Dr. Keck of Dallas Animal Clinic. Kudos to them for scheduling it on such short notice! He was very nice. He had a good stall-side manner with both me and Bob. He and I see eye-to-eye on letting horses be horses regarding the conditions in which they are kept, so we got along great. He also seemed to know his stuff, doing a thorough exam and putting Bob through his paces.

He pronounced Bob to be healthy and sound for his intended use, except for being a bit underweight and suffering from some recent laminitis on his front feet (his previous owner let his feet go, unfortunately). Bob was a complete gentleman all through the exam and was unfazed by the various types of torment that he was put through: flexion tests, extension tests, thermometer (say no more), etc.

Hopefully Bob will adapt quickly to his stall at the stable, as he has been out on pasture. It’s just a temporary home for him during the trial period so as not to arouse Kim’s suspicions. It’s a lovely barn and arena with nice folks running it, but it has very limited turn-out space for the horses to be, well, horses. So I have another barn picked out for Bob if all goes well.

So, now, I go home and pretend that today was just another Monday morning spent doing horsey things with Mary. And, it was—sort of.

Michael Heggen is a horseman, maker, and thinker who lives in Salem, Oregon with his wife, Kim, and "three to eight cats". He stays quite busy riding, driving, and caring for their three horses, Boulder, Shasta, and Bob. Among other things, Mike has been a fencing coach, police chaplain, computer consultant, aspirant to the diaconate, computer salesman, box boy, carpenter, computer technician, typesetter, church youth leader, copy machine operator, and network administrator. His other interests include juggling, reading voraciously, and (pretty occasionally these days) cycling.
View all posts by Mike →
This entry was posted in Horses, PA Protege ("Bob") and tagged Dr. Keck, Jill, Kelsey, Mary. Bookmark the permalink.