Jenn told me that “the three amigos” (Bob, Beau, and Jamocha) had been playing all kinds of horsey games with each other this morning, including kicking up their heels and chasing each other around the round pen—the inside! So, the band split appears to have been a good choice. His bites are healing nicely, too—maybe someday he will have a full coat of hair.

Kim and I went out to have some Bob time today. Kim caught, haltered, and groomed Bob on her own. She cleaned two of his hooves on her own, too. I showed her how to use treats to get Bob to stretch his neck and back, which is always fun.

Kim did really well once she stopped gripping Bob with her calves. Bob’s brakes weren’t working well at all, which is weird for him. So we checked and discovered that Bob’s headstall was a little too short. After letting it out a notch, he was much more responsive (and more comfortable). We might try letting it out one more notch next time. Walking, turning, stopping, and backing were plenty for Kim without the benefit of a saddle and stirrups, so after about 20 minutes, we called it good. She said it was a very different experience, and interesting, but that she will be glad to have stirrups and a saddle.

Jenn showed me which stall will be Emma’s. She will get the extra large foaling stall in the arena barn. They were starting to build the paddocks for the arena barn stalls today, and Jenn said that Emma’s paddock will come a little later. It all kind of brought home the reality that I am about to have my own horse. 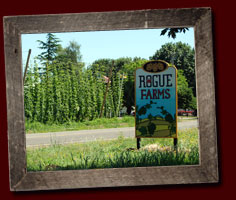 On the way home, we spotted a sign that said “Rogue Garage Sale” with the Rogue Ales logo. And then I remembered that Rogue has a hop farm and tasting room in Independence. Now, Rogue garage sales mean good prices on cases of Rogue’s most excellent beers, so off we went. It turned out to be at the end of a road I had ridden down a couple of years ago on Trikey, but the farm was owned by someone else then. Too cool! The tasting room was great (their single-malt ale is heavenly), and we learned that they serve light food there, too. I think that there are numerous post-horse stops there in our future…. Maybe even a cross-country ride from the barn to there next year.

I hope to go pick up Emma next Saturday (in Kennewick, WA), but we still have to get the paperwork taken care of. This includes the sale contract for Emma (to us) and the sale contract for the unborn foal (back to the seller). Then there is the governmental paperwork: a certificate of veterinary inspection (CVI) and an import permit for the state of Oregon, and a change of ownership inspection for the state of Washington.

Mary has offered her horse trailer (and truck), which is a 4-horse slant with 6′-9″ headroom, to bring back Emma. That’s a little shorter than I would like, as she will have to keep her head a little low. But as I was driving by United Rentals, I noticed that they have a horse trailer for rent (their website says otherwise). They were closed, so I couldn’t get close enough to measure it, but I think it might be over 7′ tall. I’ll call them Monday morning and see.