“I am smarter than you!” and a decision is made

Bob-wise, today was a repeat of yesterday—an easy day—except that I ended up in a minor rodeo. And Bob wasn’t the bronco.

I went down to Bob’s pasture. Jamocha and Beau were grazing on the track and Bob was in the grass with the gate closed, which is not unusual as we are trying to put some weight on Bob. Bob was at the far corner of the pasture, so I headed over there and haltered him. Then I noticed that there is a fencepost down in the corner, so that the electric fence between the outer track and the inner pasture is down. Uh oh. I sure hope Bob didn’t do this….

I headed back to the gate with Bob. Jamocha was there looking interested. That should have been my first tip. I led Bob through the gate and as I was turning around to close it, zoom! Jamocha slips through. Crap. I tied up Bob to a fencepost and then spent some time trying to herd Jamocha back through. He was having none of that. I did finally manage to get him to come over to me, and I tried to loop my arm around his neck to convince him he was caught. Bad idea. Jamocha snorted and galloped off.

So, I decided that this was more than I could or should deal with, closed the gate with Jamocha still in there, untied Bob and headed for the barn. I left Jenn voicemail explaining what had happened, and as I was doing so, realized that it probably didn’t matter since the fence was down anyway.

By now I was really short on time, as I had to be in Salem to teach an early lesson. I groomed Bob and then it was time to go. We headed back to the pasture, and there was Jamocha, right by the gate. A light bulb went on in my head, and I said to myself, “I am smarter than Jamocha. Ha!” Jamocha looked like he missed his buddy, so I put myself between Bob and the gate, carefully positioning us so that Bob could quickly go through the gate. I opened the gate and sure enough, Jamocha trotted through. While he was turning around, Bob and I went through, leaving Jamocha on the track looking perplexed. Ha!

I turned Bob loose, came back through the gate, touched my finger to Jamocha’s nose and triumphantly said, “I am smarter than you!” I love it when a plan comes together…. 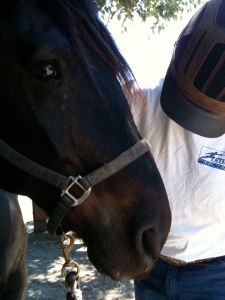 Emma does some nuzzling with Mike after his test ride

Also of note today: Kim and I decided that we’re going to buy Emma. She is in foal for a May delivery, and the seller wants the foal back at weaning, which is fine with us. We talked through the various possibilities and decided that this is the right choice. I’ll be able to work with Emma right away and develop some bond before she foals, and then be able to continue working with her shortly after she foals. Mary has agreed to help with the foaling proper, and although another species, foaling is something with which Kim is familiar. It will be an exciting spring….

It’s good to finally have the decision made. Now we just have to work out the details of the deal with the seller. I’ve sent draft documents to her, so now I am waiting to hear back.

Michael Heggen is a horseman, maker, and thinker who lives in Salem, Oregon with his wife, Kim, and "three to eight cats". He stays quite busy riding, driving, and caring for their three horses, Boulder, Shasta, and Bob. Among other things, Mike has been a fencing coach, police chaplain, computer consultant, aspirant to the diaconate, computer salesman, box boy, carpenter, computer technician, typesetter, church youth leader, copy machine operator, and network administrator. His other interests include juggling, reading voraciously, and (pretty occasionally these days) cycling.
View all posts by Mike →
This entry was posted in Horses, PA Protege ("Bob") and tagged Emma, foaling, gates, horse shopping, Kim, Mary. Bookmark the permalink.