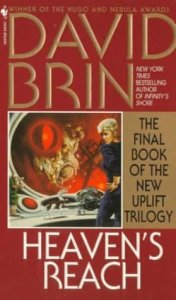 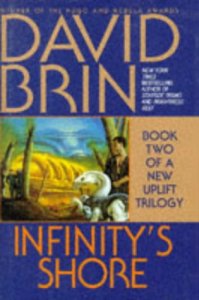 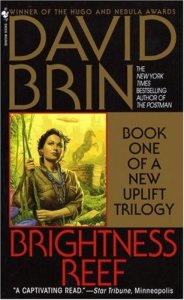 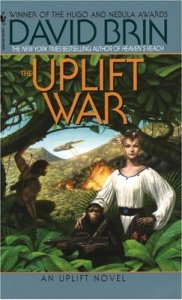 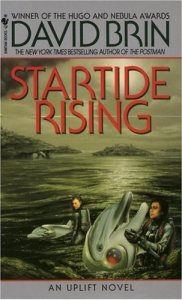 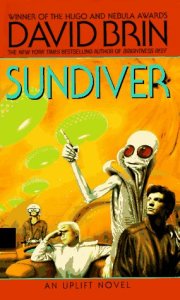 I've been happily re-reading David Brin's Uplift trilogies. Between reading those and lots of cycling, plus fall at the salle d'armes (traditional resumption of fencing after the slow summer), I've been simply swamped!

It's been at least ten years since I read these books. Brin's projection of inter-galactic politics is so similar to much of the current political situation. But, maybe that is because politics remains the same with the only change being in the cast of characters.

Brin's first trilogy are some of his earliest novels, and that shows, except in The Uplift War, which won the Hugo in 1988. Brin fleshes out some very interesting ideas in this trilogy, at the same time exhibiting the ability to successfully allude to other events not covered in the book one is reading (a trait that I enjoy in science fiction writing). But the characters in Sundiver just don't ever grab you. They are interesting, but as my wife says, "You don't care all that much what happens to them."

The second Uplift trilogy is one book in three parts (where the first trilogy was three standalone novels). The writing is good and the characters are interesting. The coming of age element is present in a couple of the plotlines. The alien races are just so interesting, as are the interactions between the races. And Brin only spoonfeeds the reader to remind them occasionally of past events, while leaving many other events to allusion and context.

The universe he has created is very, very rich. I will be watching to see if he revisits again in future writings.

Michael Heggen is a horseman, maker, and thinker who lives in Salem, Oregon with his wife, Kim, and "three to eight cats". He stays quite busy riding, driving, and caring for their three horses, Boulder, Shasta, and Bob. Among other things, Mike has been a fencing coach, police chaplain, computer consultant, aspirant to the diaconate, computer salesman, box boy, carpenter, computer technician, typesetter, church youth leader, copy machine operator, and network administrator. His other interests include juggling, reading voraciously, and (pretty occasionally these days) cycling.
View all posts by Mike →
This entry was posted in from Vox and tagged david brin, science fiction, uplift. Bookmark the permalink.