“The Originist” by Orson Scott Card (from Maps in a Mirror) 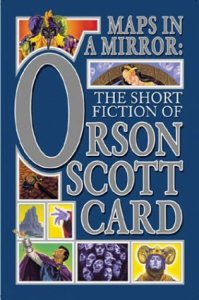 Maps in a Mirror

I first read "The Originist" in about 1994. It was part of an anthology called Maps in a Mirror, which my friend Alan persuaded me to read. I was captivated. The story is set in Isaac Asimov's Foundation milieu.

About five or six years ago, I recalled the story and wanted to re-read it (my memory was stimulated by my dabbling on everything2.com). But I couldn't remember the name of the story. Worse, I thought Asimov had written it, and that it had just been a vignette within one of the Foundation novels. I purchased the entire Foundation series and re-read it, looking for this story. Obviously, I didn't find it, but I really enjoyed re-reading the Foundation stories, many of which I hadn't read since high school. I began to seriously wonder if I had imagined this story. Eventually, I set the obsession aside.

Almost exactly a year ago, I started editing Wikipedia articles at the behest of our friend Katr (okay, so it didn't take a whole lot of persuasion). And my memory of this story was rekindled. I still couldn't remember it, so I re-read the Foundation series again. Again, I enjoyed it, but I still couldn't find this story.

Enter, The Google and The Internets.

With the assistance of my fabulous wife, who is the Search Queen, I found references to the story finally and was relieved to discover that I had not imagined the entire thing. I began looking for the anthology that contained the story in my local bookstores. No luck. Not used, not new. I bided my time and kept looking…. 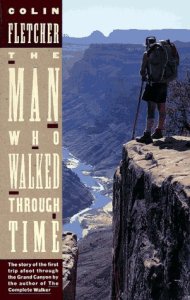 The Man Who Walked Through Time: The Story of the First Trip Afoot Through the Grand Canyon

A year later (last week, perhaps inspired by Colin Fletcher's The Man Who Walked Through Time ), I gave up and ordered it on Amazon along with a few other things I couldn't find elsewhere. I finished reading it this morning, and was just as captivated by it as I was more than ten years ago — moreso, in fact. It was well worth the chase.

"The Originist" is, as I said, set in Asimov's Foundation milieu. It takes place on Trantor, right at the end of Hari Seldon's life. (If you aren't familiar with the Foundation series, most of Asimov's fiction is set in this possible future that covers more than 20 millennia beginning a few hundred years from the present.) The main character, the originist himself, is an extremely wealthy scientist whose area is the origins of humanity — more specifically, what qualities define humanity. The protagonist's wife is engaged in research (and other things) at the Imperial Library, where she is an indexer.

And the indexing is the part of the story that fascinates me. These people spend their days following streams of consciousness as they read through their assigned material. Words and phrases that trigger an association — any association — with something else are indexed (hyperlinked). The work environment is kept marvelously chaotic to encourage free association. The indexers don't even work on the same project every day, as they are assigned to different workstations every morning and pick up where the previous day's indexer left off.

In other words, an utter dream job for an ADHD philomath like me.

As an almost forty-something reader this go-round, I was struck by the doubt of Card's protagonist. At various times, he doubted himself, his wife, his friends, his sanity, and his research. His self-imposed isolation interfered with his ability to clearly see reality — especially in his relationships with people. Yet his friends and family had the wisdom to realize that they could only gently try to cure his increasing blindness with the use of encouragement and love — he had to see through the glass, dark as it was, for himself. Hmmm… more adult ADHD parallels.

My brain operates, um, tangentially. So for me, the World Wide Web and hyperlinking are both curses and godsends. I have been dabbling with the Web since the early days of Mosaic and gopher back in the mid-90s. Card originally published this story of the power of community associative thought in 1989 — before Internet hyperlinking was a reality, and before sites like Wikipedia (with its similarity to Asimov's Encyclopedia Galactica) and everything2 came about. Remarkable.

Orson Scott Card is best known for his science fiction novel Ender's Game. And he is a fine novelist. He is also a brilliant crafter of short stories, from darkly creepy to brightly hopeful. The almost 700 pages of fiction in Maps in a Mirror is a feast for the story-hungry reader.

Michael Heggen is a horseman, maker, and thinker who lives in Salem, Oregon with his wife, Kim, and "three to eight cats". He stays quite busy riding, driving, and caring for their three horses, Boulder, Shasta, and Bob. Among other things, Mike has been a fencing coach, police chaplain, computer consultant, aspirant to the diaconate, computer salesman, box boy, carpenter, computer technician, typesetter, church youth leader, copy machine operator, and network administrator. His other interests include juggling, reading voraciously, and (pretty occasionally these days) cycling.
View all posts by Mike →
This entry was posted in from Vox and tagged adhd, associative thought, foundation, free association, hyperlinks, hypertext, indexing, isaac asimov, orson scott card, short stories. Bookmark the permalink.