This is not a good way to start the day. There can be no good reason for the caller ID to tell me that the stable is calling at six o’clock in the <ahem> morning. This cannot be good news—especially given that we vaccinated Bob last night.

It wasn’t good news, but it could have been way worse. Jenn was calling to tell me that when she went out to do her morning rounds, Bob was lying down in his stall and shivering—a lot. She told me she had taken his temperature, and it was at the low end of normal for him, so she looked him over and then put a blanket on him.

Okay, so no fever. That’s good.

No hives or swelling or tenderness at vaccine sites. That’s good, too.

She said she had called the vet’s office and talked to the vet on call, and that he was on his way, but not hugely worried. Okay, that’s not so bad.

After some mutual brainstorming, we concluded that he was just plain cold, possibly exacerbated by the vaccines. His stall is fairly exposed and he is underweight. Combine all that and you have a recipe for a chilly horse. We decided to call off the vet and watch him closely.

I started reading up on vaccine reactions. I found plenty of horror stories, but none that quite fit the situation, leading me to believe that the problem probably really was some early stage hypothermia. I called Jenn back about 40 minutes later, and he was up and around and grazing in the pasture—and free of shivering. Very good news.

Jenn advised me that we needed to get more aggressive with putting weight on him before colder weather, and I concurred. So, free choice hay (50-50 mix of grass and alfalfa) to start with, along with plenty of pasture time. She gave me some suggestions about supplementing with additional feed, and I said I would go do my homework and get back with her.

So, there I was, wide awake several hours earlier than I usually get up—and this after a late night chatting about horsey stuff with Mary out at the barn. I started doing research on supplemental feed and asked Mary for advice.

A lot of googling and several emails later, I learned some good stuff. Horse nutrition is not entirely unlike managing nutrition for human athletes.

Dump too many calories in the stomach at one time, and you have an unhappy gut. In humans, the athlete in this situation who continues to engage in heavy exercise discovers the human body’s solution for this problem of fermenting food in the stomach that is not moving into the intestine quickly enough: it all comes back up, and then the athlete feels much better (but is now hungry again). Horses, however, are incapable of vomiting. Hence the setup for every horse owner’s nightmare: colic. So, putting weight on a horse has to be handled carefully to prevent colic.

Human athletes rely on simple and complex carbohydrates during exercise and endeavor to keep a steady flow of carb-rich food and drink to keep energy levels up. Horses get lots of energy from carbs, too. However, a horse with lots of energy isn’t necessarily a good thing—especially if you’re the one riding him when he is “feeling his oats”. So carbohydrate management in horses is just as important as it is for humans, but for very different reasons.

I ended up settling on a product called Nature’s Essentials® Amplify® Supplement by Purina. This is a pelleted feed supplement that is designed specifically for weight gain. It is designed to be used with hay and/or pasture. Along with the stuff needed for weight gain are essential amino acids, vitamins, and minerals needed for healthy coat, joints, and hooves. Perfect!

Mary gave it the thumbs up, so tomorrow I’ll stop by the feed store and pick some up.

After I finished work, I decided to swing by the barn to check up on Bob. It was too late to do any work with him, but I wanted to lay eyes on him. He was in his stall happily chomping away on hay. He was far more interested in hay than me, but I wanted his attention and I didn’t want to go in the stall as I was too tired to change into my boots (Birkenstocks are not good stablewear). Enter, the horse treat!

One horse treat later, I had Bob’s complete and undivided attention. Intermittent reinforcement is a wonderful thing. The vaccine sites all looked good, and so did Bob. Whew. Time to give Bob a good scratching along his mane, and then I would need to go.

Bob really enjoyed the scratching, yes. But then I realized that Bob was simply enjoying me. And that was pretty darned cool. He wasn’t even making his irresistible “please give me another treat” face. He seemed to know that I was kind of lonely, so we just spent some quality time together. And just to make it even better, he nickered at me for the very first time.

I left the barn very happy. As I got on the road to head home, I saw that the late afternoon sun—the golden hour, as photographers call it—was in full swing. This is my favorite time to be outside, as the light is fairy dust that transforms the ordinary into gold-tinged splendor. Fields and mountains that are bathed in this glorious light are breathtaking. There weren’t mountains on the drive home, but there were plenty of fields on the fruited plan—and the western Willamette Valley is ringed by hills, which acted as a fine stand-in for purple mountain majesties. 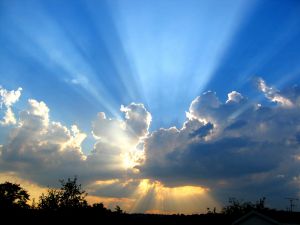 An advertisement for God (courtesy of Matthew Bowden)

And then there was what our friend Kathleen calls “an advertisement for God”. This happens when the sun is peeking out between clouds at a relatively low angle such that the clouds are enflamed and there are spectacular rays of sunlight shooting across the sky.

All in one day, I had my heart nearly stop with an early-morning phone call, I had my heart stolen by a 22-year-old, and I took heart from a cosmic billboard. Not a bad day at all.

Michael Heggen is a horseman, maker, and thinker who lives in Salem, Oregon with his wife, Kim, and "three to eight cats". He stays quite busy riding, driving, and caring for their three horses, Boulder, Shasta, and Bob. Among other things, Mike has been a fencing coach, police chaplain, computer consultant, aspirant to the diaconate, computer salesman, box boy, carpenter, computer technician, typesetter, church youth leader, copy machine operator, and network administrator. His other interests include juggling, reading voraciously, and (pretty occasionally these days) cycling.
View all posts by Mike →
This entry was posted in Horses, PA Protege ("Bob") and tagged Amplify, Jen, Mary, nutrition, Purina, vaccines. Bookmark the permalink.