A Boulder comes to rest at Abiding Acres 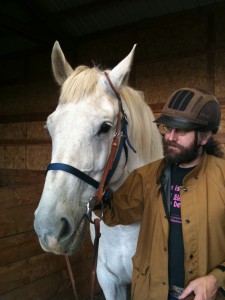 Boulder gets a chin scratch from Mike

I have had Boulder on trial this week, and today was the last day of the trial. He didn’t have a perfect trial, by any means, but there were no deal-breaking screw-ups on his part. So I took a deep breath and told the seller I was keeping him.

I have some posts to catch up on from the last couple of weeks (they have been rather eventful), which will have more details, but briefly:

After Thursday’s incident, I was a bit reluctant to jump back in the saddle again without a bit of support from someone like Mary. We had planned to go for a short trail ride in McDonald-Dunn Forest, but it rained a lot yesterday, so we decided that muddy trails and new horses were probably not a good mix.

Mary came out and we fussed with saddle fitting to see if a standard tree on a Specialized Saddle could be made to fit Boulder. There was a nice 17″ Wade saddle by Specialized on their website for $1000 (a demo or a return), but it had a standard tree like Kim’s saddle. We spent over an hour working with saddle pads and fussing before concluding that the standard Specialized tree might barely work for Boulder—but that it was not a good long-term solution. So, no dice on the Wade, but Boulder was a champion for us, standing the entire time without even a hint of complaint.

Next, Mary worked with Boulder patiently for about 20 minutes on standing for mounting, and finally got him to stand still. She rode him in the arena for about 20 minutes or so, and Boulder was good for her, except they didn’t agree on the cue for a canter. Eventually, Boulder got Mary to understand the “correct” cue and cantered for her a little.

Then it was my turn. Boulder and I had a very pleasant ride in the arena. He stood pretty well for mounting and did not even think about walking off (let alone running). He did what I asked, and if he didn’t know what I was asking, he generally did what he thought I might be asking for.

Okay, I’ll keep him! Thanks for all of your help, Mary!

Michael Heggen is a horseman, maker, and thinker who lives in Salem, Oregon with his wife, Kim, and "three to eight cats". He stays quite busy riding, driving, and caring for their three horses, Boulder, Shasta, and Bob. Among other things, Mike has been a fencing coach, police chaplain, computer consultant, aspirant to the diaconate, computer salesman, box boy, carpenter, computer technician, typesetter, church youth leader, copy machine operator, and network administrator. His other interests include juggling, reading voraciously, and (pretty occasionally these days) cycling.
View all posts by Mike →
This entry was posted in Boulder, Horses and tagged Boulder, cantering, horse shopping, Mary, Specialized Saddles. Bookmark the permalink.