It really was a trail ride; the “first” part is that it was that first one since I officially became Boulder’s new owner. 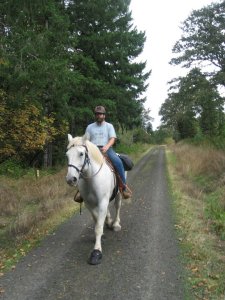 Boulder steps out in his new Boa Hoof Boots in Dunn Forest. Photo by Mary Miller.

But first, the boot report…. The Boa boots went on much more easily today. I decided to try using the gaiter today on the left front, and it was easy. The right front was harder, but not as tough as yesterday. I got the inside edge of the boot seated first, as that’s where he has a little bit of hoof flare. Good choice. They came off easily at the end of the day.

Boulder was easy to catch today, so I had him almost ready when Mary and Herc arrived to pick us up at the barn. After Mary helped me get Boulder’s boots on, we drove south to OSU’s Dunn Research Forest, just over 15 minutes away. Dunn Forest, the neighboring McDonald Forest, and Peavy Arboretum are all owned and managed by Oregon State University’s College of Forestry, with some help from the College of Agriculture in a few places. The three adjoining parcels cover 17-1/2 square miles, which contain many miles of essentially closed roads and multi-use trails. 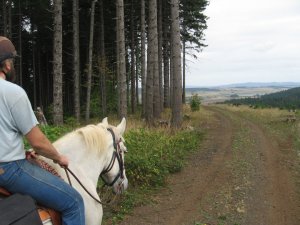 Boulder chugs his way to the top for a rest and lovely view north from Dunn Forest. Photo by Mary Miller.

We drove to gate 100, which is near the northwest corner of Dunn Forest, parked, and saddled up. Hunting is allowed in Dunn (not McDonald) with a permit from OSU (very limited number of permits) during certain seasons, but we had the place to ourselves today. I forgot my GPS unit, but I think we rode a little over three miles with about 500 feet of climbing—mostly walking, but a little trotting, too.

We were on gravel roads the whole time, but Boulder did really well with his new boots—with even a bit of trotting uphill. We stopped at the top of the ride to rest, and Boulder just dripped sweat steadily onto the ground. His conditioning has improved significantly since we’ve had him, as this time (unlike at Tryon Creek) he only sounded like a steam engine on the steeper climbs and he recovered pretty quickly. 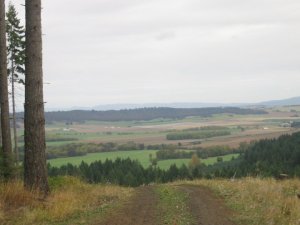 View from our ride, looking north from Dunn Forest. Photo by Mary Miller.

Until we got to the steep part of the climb to the ridge, Boulder spent a good bit of the ride convinced that a large monster was going to leap out from behind every bush and eat us all. After the steep part, that ceased to be an issue. As I am writing this, I’m begin to wonder if that wasn’t fear so much as being a bit trailer sour. Hmm….

We finished our ride, headed back to Abiding Acres, gave Boulder a washdown (he was drenched in sweat), put him in his stall for his dinner, and then I headed to work.

It was a good horse day. We had some really nice views, nice weather, and the boys got some (badly needed) exercise. No big wildlife spotted, but I heard a raven croaking nearby, and that sound always makes me happy.

Michael Heggen is a horseman, maker, and thinker who lives in Salem, Oregon with his wife, Kim, and "three to eight cats". He stays quite busy riding, driving, and caring for their three horses, Boulder, Shasta, and Bob. Among other things, Mike has been a fencing coach, police chaplain, computer consultant, aspirant to the diaconate, computer salesman, box boy, carpenter, computer technician, typesetter, church youth leader, copy machine operator, and network administrator. His other interests include juggling, reading voraciously, and (pretty occasionally these days) cycling.
View all posts by Mike →
This entry was posted in Boulder, Horses and tagged boots, catching a horse, Dunn Forest, hooves, Mary, trail rides. Bookmark the permalink.