Join up (sort of)

I had a really productive day today, which always makes me happy (and is all too rare an event, unfortunately). I got the tires on Kim’s car rotated and balanced, went to Lowe’s to buy stuff for two small projects, came home, ate lunch, installed two basic trellises for a couple of climbing plants in the yard (project #1), installed a new showerhead in the bathroom (project #2), bought some new jeans and socks at Double H (along with a horn bag for trail riding, a blue bridle rack, and some more horse treats!), and then went out to the barn.

Among other things, it was a day past time to fill up Bob’s daily grain bags for the week. Given how much hay he has been scarfing down from his new Freedom Feeder, I decided to reduce his Amplify ration to one pound per day. That might be too big of a jump, but he has just been an eating machine. We’ll have to see how his weight is after a week of this. Either way, I expect I will have to go back to two pounds a day as the novelty of the Freedom Feeder wears off.

I worked with Boulder’s feet quite a bit today. First I picked out his fronts and experimented with Jenn’s Hoofjack, which is a hoof/leg rest for use while working on a horse’s feet. Hers has the standard size cradle and I only tried it on his fronts, so the results weren’t completely conclusive. He tolerated the Hoofjack, but still would pull his foot away after a while. I think it would go better with the larger draft-size cradle, so I am considering ordering a Hoofjack of my own.

Then I put Boulder’s boots on. The boots went on even more easily today than yesterday, and I used the gaiters on both feet. Boulder was also more cooperative with his feet today (except for some foot pumping on his hinds), which helped.

Next, I picked his hinds and took photos of them. I am not happy to see that both hinds have little cavities developing along the white line, which are getting packed with tiny rocks—just like the left front, except not thrushy. They have been there all along, I think, but previously I thought those areas were sole.

It took a lot of work to pick out all those little rocks, so Boulder and I were both kinda tired by the time I finished. I had planned to ride Boulder today in the arena, but decided to see what he could do in the round pen instead.

I worked him at liberty in the round pen for about 20-30 minutes, and he did pretty well. He walked, trotted, and halted on command (both directions), although sometimes it took a couple of repetitions of the command to get through to him, reinforced with body language and sometimes twirling the end of the lead rope. When I asked him to trot, he almost always gave a little head toss and sometimes a snort as he started to trot. The one thing I wasn’t able to get was a canter. He came close once, but that was all I got. Work to be done, there, I guess.

After cooling him down, on a whim I decided to see if he would come to me, a la Monty Roberts’ “join up”. I halted him, bladed my body a little bit away, rounded my shoulders, dropped my eyes, and folded my arm (the one closest to him) up against my midsection—and waited. After about a minute, he was at my elbow. Too cool!

So, I decided to see if he would follow me at liberty. Yup, he did. Walk, halt, and turns both directions. It was just magic.

I decided it probably wasn’t going to get any better than this, so I reluctantly clipped his lead rope back on and we walked back to the barn, stopping to sniff noses with Bob. I opened up the new jug of horse treats (Berry Good, raspberry alfalfa) to see what he thought of them. He showed great interest, so we did stretches for treats. He actually got his lips down close to his pectorals, and he was more flexible to the sides, too.

Those treats smell good enough for me to eat, so I grabbed a couple more and we went to his stall to take his boots off. He politely stood for me with no halter in his stall while I took the boots off and took pictures of his front feet. What a good boy!

I’m trying to get him to come when I call him, so I finished by calling him from the outside of the stall. He is starting to recognize his name, and if I showed him a treat, he readily came over. But not without a treat.

Ya can’t win ’em all, but today was overall definitely a “win”. 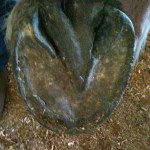 Boulder’s left front hoof. Note the little cavities out along the toe where I picked rocks out and treated for thrush. 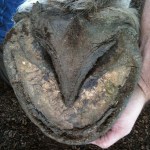 Boulder’s left hind foot. Note the cavities along the toe where I picked out small rocks today. The purple sole around the frog is stained from gentian violet. 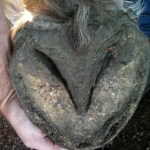 Boulder’s right hind foot. Note the cavities in the toe where I picked out small rocks today. This foot is the one that is essentially free of thrush now. 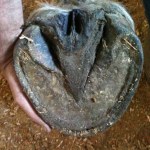 Boulder’s right front foot. There are some small cavities on the right side of the toe. Most notable is how badly thrush has eaten up the central sulcus (see the detail photo). 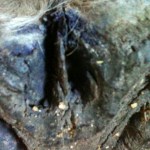 Michael Heggen is a horseman, maker, and thinker who lives in Salem, Oregon with his wife, Kim, and "three to eight cats". He stays quite busy riding, driving, and caring for their three horses, Boulder, Shasta, and Bob. Among other things, Mike has been a fencing coach, police chaplain, computer consultant, aspirant to the diaconate, computer salesman, box boy, carpenter, computer technician, typesetter, church youth leader, copy machine operator, and network administrator. His other interests include juggling, reading voraciously, and (pretty occasionally these days) cycling.
View all posts by Mike →
This entry was posted in Boulder, Horses and tagged Amplify, boots, cantering, hooves, join up, round pen, slow feeders, treats. Bookmark the permalink.