Well, today was an interesting day. It started with a 7:30 a.m. phone call from Jenn at the barn. I slept through that. When she called again at 8:00, I woke up and answered. It seems Bob had some kind of gooey icky eye infection, and that the vet should probably come out and make sure there wasn’t an ulceration.

I ran some errands and then headed out. I got there at about 11:25 and hustled out to get the boys, as I wanted to take care of a couple of things for Boulder while the vet was out anyway. Boulder trotted off twice, so I caught Bob (easily, of course) while Boulder oh-so-cleverly (not) trotted off to the water trough up by the gate. We followed him up there, whereupon he was easily caught. Silly horse. 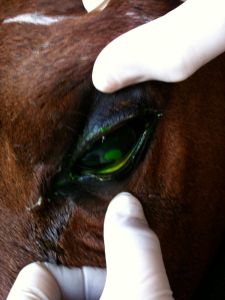 Bob's left eye this morning. His eye has been stained with dye. The bright green in the center of the eye is an ulceration.

Dr. Keck arrived while I was out catching horses, so we got to it as soon as I got to the barn. Bob had his fly mask on, so I hadn’t actually seen his eye yet—and it was indeed yucky. Dr. Keck did a quick cleanup, looked it over, said, “Hrrm,” went to his truck, and came back with a hypodermic of sedative. Into the neck went the needle and he went back to his truck.

I was holding Bob’s head. About thirty seconds later, I hollered out to Dr. Keck, “So, how quickly does this stuff kick in?”

He wasn’t kidding. When I asked the question, Bob’s head was already dropping. Within a minute he was swaying a bit on his feet. Bob was like, “Hey, man…. Nice overalls, Dr. Keck-o! I really like… that… color… thtthhhppppt.”

With Bob now a blithering idiot who had to be reminded to keep his feet under him, Dr. Keck stained Bob’s eye with fluorescine, and there was a pretty good-sized ulcer right in the center. Poor guy! Having had corneal abrasions myself, I know how much they hurt. Who knows how he scratched it, but due to the abrupt onset, it does appear to be an abrasion, rather than viral (which is good). Dr. Keck debrided the eye, gooped it up good with antibiotic ointment, and told me to stop by the clinic in a couple of hours for meds.

While Bob was in la-la land, we microchipped him. So, if he decides to make a run for Alaska again like he did in his first week at Abiding Acres (or in the event of natural disaster), he will be easily identifiable. Considering that the procedure involves getting stuck in the neck with a 16 ga. needle, Bob was clearly feeling no pain. We led him back, tottering, to his stall, where he wobbled around pitifully. No food for two hours.

Boulder was next. He did not appreciate a 16 gauge needle in his neck, and showed his displeasure by stepping on Dr. Keck in his haste to get away from the Bad Man in the Blue Coveralls. It’s a good thing I am as big as I am, or I would have gone for a bit of a ride while holding his head. But, we got that done. We gave him a minute to catch his breath and then rudely shoved a foot-long piece of tubing up his nose and squirted strangles vaccine (required by the barn) into his left nostril. That didn’t make him very happy either. (It will be Bob’s turn another time when he doesn’t have some other potential infection going.)

Dr. Keck’s work was done, so he headed out. By this time, Bob was causing a hullabaloo in his stall by whinnying his fool head off trying to figure out why Jamocha wasn’t next door. So, we put poor Boulder in Jamocha’s stall next to him in an effort to give him some familiar company. It helped a little. Instead of calling every 60 seconds or so, we got to get a couple of minutes of quiet in between whinnies. Long-suffering Boulder went to work on Jamocha’s hay while I booted him for Jenn’s edification.

Bob gradually calmed down a bit, and Boulder even showed him some sympathy. I think Boulder kinda liked being over there in the main barn, actually. He seemed very relaxed and kept coming over to say hi to me in between bites of hay. I made up Bob’s grain bags for the week (still at the reduced ration of 1 lb. of Amplify per day until he stops eating like a madman with the slow feeder).

It being about 1:30 now, I headed for Dallas, stopping at Burgerville in Monmouth for a pumpkin smoothie (not as good as the blackberry, but still pretty tasty!). I chatted with Mary briefly at the clinic (where she works), then filled out paperwork for the microchips while the meds were drawn up. Antibiotic eye drops (with a dilator and analgesic mixed in, I think) three times per day, plus ‘bute twice a day. At Jenn’s request, I got the powdered form of ‘bute, as it is a lot easier to administer to most horses.

I took the meds back to Jenn and gave her the instructions. Bob will keep his fly mask on 24/7 for now, too. We’ll keep a close eye on him and follow-up with Dr. Keck by phone on Wednesday. If all goes well, Bob should make a full recovery in the next few days.

As a further experiment, we’re going to keep Boulder’s boots on overnight and see how he does. We’re trying to find a way to minimize the number of times in a week we have to put boots on him because it is such a pain.

And then it was time to go to work.

Michael Heggen is a horseman, maker, and thinker who lives in Salem, Oregon with his wife, Kim, and "three to eight cats". He stays quite busy riding, driving, and caring for their three horses, Boulder, Shasta, and Bob. Among other things, Mike has been a fencing coach, police chaplain, computer consultant, aspirant to the diaconate, computer salesman, box boy, carpenter, computer technician, typesetter, church youth leader, copy machine operator, and network administrator. His other interests include juggling, reading voraciously, and (pretty occasionally these days) cycling.
View all posts by Mike →
This entry was posted in Boulder, Horses, PA Protege ("Bob") and tagged Amplify, Boob, boots, Burgerville, catching a horse, injuries, Jen, Mary, slow feeders, vaccines, vet. Bookmark the permalink.