Zen and the Art of Exhaust Brake Installation, Part 1

I finally got something for Hamish* that I have been wanting for him for a long time: an exhaust brake. What’s an exhaust brake, you ask? Well, sit back and let ‘splain it to you….

Diesel engines surpass gasoline engines in terms of power, fuel economy, and durability (but gasoline engines cost less and generate more horsepower with snappier acceleration), so they are the preferred engine for heavy-duty hauling and towing applications (including commercial trucks, of course). One of the idiosyncrasies of the diesel engine is that it doesn’t have anywhere near the speed retarding capabilities of a gasoline engine (i.e. when you let off the throttle in a gas-powered vehicle, it slows down significantly, but letting off the throttle on an ordinary diesel engine results in only a modest decrease in speed). Thus, when you’re heading down a hill in a diesel-powered vehicle, you have to use your brakes more.

Heavy commercial diesel truck engines have technology built into them to deal with this, known as compression release engine braking and generically referred to as a “jake brake” (after Jacobs, the company that pioneered it). The jake brake opens the exhaust valves during the compression cycle to make the engine act as a brake when desired (and generate noise that sounds a bit like a muffled air-powered jackhammer). Diesel pickups like mine instead either have no engine brake (most common) or use an exhaust brake, which is available from several third-party companies as an after-market add-on (and increasingly available from the manufacturer on new diesel pickups). Instead of using the exhaust valves the way a jake brake does, an exhaust brake restricts the exhaust flow, allowing the engine to yield almost as much braking horsepower as it has horsepower available for acceleration.

So, why does a 17-year-old pickup need an exhaust brake? Try hauling two draft horses (combined weight: 3,500 lbs., plus their feed and tack, plus the weight of the trailer; total weight: about 12,000 lbs.) over the Cascade Range and you will understand.

Remember that bit from three paragraphs back about having to use your brakes more on a descent in a diesel? Well, that’s no big deal—unless you’re hauling a big trailer, in which case you have to use your brakes a lot. Heavy brake use on a downhill heats up your brakes, reducing their effectiveness and shortening their useful life, and can result in brake fade/failure. And brake fade is exactly what happened in September when we were coming back over the Cascades from a vacation with the horses—as in, smoking brakes and rims too hot to touch, which is a Very Bad Thing when towing a horse trailer down a mountain. 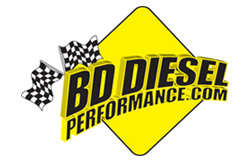 After a bunch of shopping, I ordered a BD Diesel Performance exhaust brake from Diesel Power Products in Spokane, WA. I chose this particular model because of the ease of installation and simplicity of the system. This model bolts on to the back of the turbocharger, replacing the factory elbow that connects the turbocharger to the exhaust pipe, where other kinds require cutting out a section of the exhaust and welding in the exhaust brake. Also in this model, the butterfly valve inside the exhaust brake, which is what actually regulates the exhaust flow, is powered by the truck’s vacuum system, where other models use compressed air to actuate the butterfly valve (requiring the installation of a compressor). The exhaust brake also requires upgrading the exhaust valve springs from the stock 40-lb. to 60-lb. springs, so I ordered those, too, along with a valve spring compression tool from Tork Technology.

After a one-day delay due to an addressing snafu, everything arrived today. I spent a few hours reading through the installation instructions for the exhaust brake and researching how to change out the valve springs. I haven’t ever done any engine work before, so I am kind of apprehensive about the valve springs. Fortunately, I found this video of a valve spring install on a Cummins 12-valve engine. It’s not exactly the same situation, as this guy did the work with the engine pulled and used compressed air to keep the valves floated at the tops of the cylinders, but it gives me a pretty good idea of what to expect—and he was using the same Tork tool as I would be using.

* Hamish is my 1997 Dodge Ram 2500 Cummins diesel pickup. He has a long bed, a standard cab (wish I had bought the club cab, though), two-wheel drive, and a 5-speed manual transmission. We bought him brand new, and he has seen service as a camper,  commuter vehicle, contractor’s truck, and horse hauler. I almost sold him a few years ago because I just wasn’t driving that much, but I am very glad I didn’t. He has just over 120,000 miles on his odometer now, which would lead many diesel-heads to say that the engine is “just getting broke in”. He’s a good truck, in short.

Michael Heggen is a horseman, maker, and thinker who lives in Salem, Oregon with his wife, Kim, and "three to eight cats". He stays quite busy riding, driving, and caring for their three horses, Boulder, Shasta, and Bob. Among other things, Mike has been a fencing coach, police chaplain, computer consultant, aspirant to the diaconate, computer salesman, box boy, carpenter, computer technician, typesetter, church youth leader, copy machine operator, and network administrator. His other interests include juggling, reading voraciously, and (pretty occasionally these days) cycling.
View all posts by Mike →
This entry was posted in Hamish and tagged Cummins, diesel, Dodge, exhaust brake, Hamish, horse trailers, pickup, Ram, truck. Bookmark the permalink.