Zen and the Art of Exhaust Brake Installation, Part 2

Continuing the saga from yesterday of installing an exhaust brake in my 1997 Dodge Ram 2500 Cummins diesel pickup named Hamish. Note that I am not a mechanic. I am sharing my experiences in the hope that it may be helpful to some other non-mechanic attempting the same tasks. If you are reasonably handy, have a basic set of tools, and take your time, you can do this yourself. Always follow the manufacturer’s instructions and observe proper safety precautions; if you are in over your head, get an experienced diesel mechanic to do the job for you.

After getting all of the parts yesterday, today’s goal was to get the six new 60-lb. exhaust valve springs installed and adjust the valve lash while I was at it. So, this morning I read through the valve spring installation instructions from Tork one more time over breakfast and then dove in. The weather was pretty miserable, with intermittent gusts of wind and a steady drizzle with occasional downpours. Fortunately, Kim and I hatched up the idea of using the patio umbrella to give me and the engine some protection beyond that supplied by the hood. 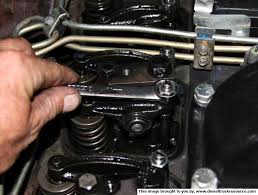 The valve covers all came off just fine, and the gaskets were fine, as were the O-rings on the cover bolts. I cleaned the gaskets up and set all that aside. The patio umbrella was keeping me pretty dry, but even with its help, I still had to keep rags over all of the cylinders I wasn’t working on—kind of like surgical drapes—to keep out the occasional bit of windblown rain. (In hindsight, I probably should have just loosely placed the valve covers back in place.)

With the valve covers off, the next thing was to get the piston in position to keep valves in place on cylinder #1, which meant putting a 7/8″ socket on the alternator pulley and turning the engine backwards by hand until the piston is at top dead center (TDC). No problem, as I had a 7/8″ socket and the accompanying ½” drive ratchet. It turns out that doing this with an 8″ long ratchet isn’t very fun, but I got it done.

On the bright side, I am pleased to report that the Tork valve spring compressor tool worked like a charm, and I had the new springs in place in short order. Now it was time to torque down the bolts that hold the rocker arm pedestal in place, and I discovered that 3/8″ drive sockets do not fit on a ½” drive torque wrench (duh!).

So, off to the auto parts store I went, initially thinking I would just buy the ½” drive versions of the sockets I needed. I looked at the price of the sockets and then remembered that there are these things called adapters that are designed for just this purpose (much cheaper, too). While there, I decided to make my life easier and bought a 14″ driver to give me some extra leverage on the alternator. Once back, torquing down the pedestal was easy.

Feeling confident, I moved on to cylinder #6. That was a challenge. I spent at least an hour trying to get out the bolt for the rocker arm arm pedestal. It wasn’t seized or anything like that, but #6 is back under the cowling with limited vertical clearance, and I simply didn’t have room to get the bolt out. Finally I called the folks at Diesel Power Products (who sold me the parts for the exhaust brake and new springs), and the tech there gave me the tip I needed—one which apparently is so well known to mechanics that no one bothers to write down the instructions for it. It turns out that there are two rubber plugs in the cowl directly over the bolts in question on both cylinder #5 and #6. Pop those plugs out and—voila!—you have room to get the bolts out. 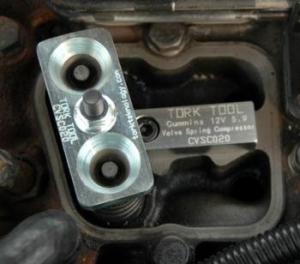 Obstacle overcome, I quickly finished #6, almost giddy at how well the Tork tool worked. I was about to start on cylinder #5 when I realized I didn’t have enough new springs left to finish the installation. Twelve valves = twelve springs, right? But I only had two springs left and I’d only done two cylinders. Hmm. Oh, right: I was only replacing the exhaust springs, but the Tork tool worked so well that in my giddiness I had replaced both exhaust valve springs and the intake valve springs on #1 and #6. Whoops.

After fixing that mistake, I kept on going, one cylinder at a time at a nice steady pace. Occasionally I had to deal with a pushrod that I had bumped out of position, but fortunately they were easy to get back in place. The tip in the Tork instructions to wrap a rag around the base of the pushrods was a good one, by the way, as I didn’t have to worry about losing a valve keeper inside the engine.

Things continued to go well until I started my last cylinder, which should have been #4. By this point, it was about 3:30 and I was just starting to lose daylight. I was also starting to get tired. I pulled the pedestal, started compressing the springs, and noticed that only the intake spring was compressing. Uh-oh. Did I have the piston in the wrong position? Hey, that exhaust spring looks awfully shiny…. Oh. That’s cylinder #2. Whoops, again. I put everything back together on 2 and switched to 4 where I was supposed to be.

All the valve springs were done, but I had decided to do a valve lash adjustment while I had all the valve covers off, as it was past the service interval. This went fairly smoothly, but was tedious. In hindsight, I am not all that pleased with the job I did and will re-do it when I have a dry day.

I double-checked the torques on the pedestal bolts and the lock nuts for the rocker arm adjustment bolts. Kim held the work light for me as I put the valve covers back on and torqued those down. That accomplished, she went back inside and I started tidying things up.

Aside from a basic set of wrenches and sockets, I really appreciated having box wrenches with a ratchet in them. I also really liked the 36-watt compact fluorescent work light (purchased from Lowe’s): very tough and lots of light right where I wanted it. The fussiest part of the job was dealing with the valve keepers, which are little curved bits of metal about the size of the nail on your pinky. There are two for each valve.  The big hero tool of the day (after the Tork tool) was the telescoping magnetic pencil, followed by the magnetic parts tray. The pencil made getting those tiny valve keepers out a piece of cake—even back on #6 where I was working blind. The tapered cone of the Tork tool made getting the keepers back in place during reinstallation easy, as all I had to do was get them close to where they needed to go and then a dental mirror came in really handy for making sure I had the keepers seated properly during reassembly.

After getting most of the tools put away, I started to reconnect the batteries and jumped out of my skin as the car alarm went off. I quickly disconnected the battery again and scratched my head for a moment. On a hunch, I put the key in the ignition, turned it to “ON”, and reconnected one battery: silence, lovely silence!

The only thing left now was to start it up. I was kind of anxious about this, but I had double-checked everything and followed the instructions. Crossing my fingers, I hit the starter, and Hamish came to life without any fuss. He sounded good, so I took him for a test drive. That went well, too, so I cleaned up and sat down to well-earned dinner.

Tomorrow will be the installation of the exhaust brake….

Michael Heggen is a horseman, maker, and thinker who lives in Salem, Oregon with his wife, Kim, and "three to eight cats". He stays quite busy riding, driving, and caring for their three horses, Boulder, Shasta, and Bob. Among other things, Mike has been a fencing coach, police chaplain, computer consultant, aspirant to the diaconate, computer salesman, box boy, carpenter, computer technician, typesetter, church youth leader, copy machine operator, and network administrator. His other interests include juggling, reading voraciously, and (pretty occasionally these days) cycling.
View all posts by Mike →
This entry was posted in Hamish and tagged Cummins, diesel, Dodge, exhaust brake, Hamish, horse trailers, pickup, Ram, truck, valve springs, valves. Bookmark the permalink.