Tonight I had the privilege of hearing the Most Reverend Desmond Tutu, archbishop emeritus of Cape Town, South Africa and Nobel laureate, speak at Willamette University in Salem, Oregon.

The archbishop spoke for more than an hour, and took about half a dozen questions afterward. He is a spry, animated man with a boyish sense of humor. Curly grey hair covers the sides of his head, the top of which gleams brownly. He is not a tall man (he appeared to have a step to stand on behind the podium), but his presence permeated the air of a packed Smith Auditorium. The audience was largely Willamette students, but there were large numbers of people from the community as well. The archbishop addressed the bulk of his comments directly to the students, though. 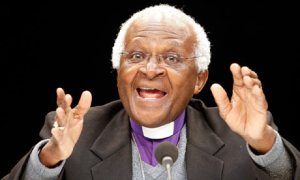 Archbishop Tutu began by wishing the crowd a good evening. When he was greeted with a polite silence in which breathing was audible, he laughed and said that we should try that again. The silence was then broken by much laughter. And he began again, and was this time greeted with a warm, “Good evening!” from the audience.

His humor was infectious, and the audience laughed many times throughout the evening. He was interrupted numerous times by applause, and received standing ovations at his introduction, after receiving his honorary doctorate of divinity from Willamette University President Lee Pelton, at the conclusion of his talk, and at the conclusion of the question and answer session.

He went on to talk about many things. I did not have pen and paper with me, so I am relying on my memory for this accounting. As a result, my recollections and observations of the evening may not be in the correct order. And in most cases I paraphrase the archbishop rather than quote him. His speech (sermon?) was rich, but I have not been able to capture all of his points. I will recount the ones that I recall best.

Dr. Tutu spoke at length about South Africa’s struggles to rid itself of apartheid, a word that most people in this country didn’t know prior to 1980, despite our own experience with Jim Crow laws.

He talked about how it is that young people are most often the ones who God chooses as prophets, both in the Biblical sense and in the modern sense. He spoke of Joshua, the lastborn of the house of Jacob, who rescued his family from famine. He spoke of David, another lastborn, who saved the Israelites from the Philistines by defeating Goliath. He spoke of young Jeremiah, as well.

The students, the young of America’s colleges and universities in the 1980s, he said, are the ones who gave the needed push to end apartheid: first by getting their schools to divest and then by sparking the groundswell that led Congress to impose economic sanctions on Pretoria, even overriding President Reagan’s veto.

He described the enormous joy of casting a vote in his own country for the first time in his life in the 1994 elections. We are free, he chortled. His utter joy and delight came through clearly, even though that election took place ten years ago this month.

He then tried to convey the thanks of the people of South Africa, those faceless people that the world does not know, to the people of the United States for their part in overthrowing apartheid. The audience could not understand, he said, what it was like to not be free, just as it is difficult to explain to a blind person what a rose looks like. So he waved an imaginary “magic wand” over us to make us temporary South Africans and then asked all of us “South Africans” to thank the citizens of the United States for helping to free them. The hall was filled with applause and cheers.

You answered our cry for help, he said. You helped free us nonviolently. To thunderous applause he cried, you did not bomb us into freedom!

After waving his wand again to change us back into our “normal, shy selves”, the archbishop spoke passionately about how we are family–literally brothers and sisters. He reminded us that when Jesus greeted Mary Magdalene after his resurrection, he asked her, where are my brothers? Jesus did not refer to them as friends or disciples, but as brothers.

God wants for us to all realize that we are family, just as did the early Church, and not just symbolically by calling each other sister or brother. Family cannot choose each other: they are a gift from God. Sometimes, he joked, they are not the gift we might ask for!

He went on to emphasize that we cannot undo that familial relationship, as King Lear tried to do. Such attempts are a fiction, he said.

God cries out to us that we are family, he said. And family does not kill each other with bombs and call the death of siblings “collateral damage”, said the archbishop. Doing so is an obscenity, he shouted to applause.

In encouraging individuals to stand for good and freedom for all people, he reminded the audience that leaders are nothing without followers. His voice would have meant little or nothing had there not been millions of people behind his leadership.

In speaking about the Truth and Reconciliation Commission he headed in South Africa after the end of apartheid and the ratification of a new national constitution, he explained it vividly for us. He gave examples of stories from both victims and perpetrators. All that people who had committed horrible acts had to do in order to receive amnesty was to openly tell the truth about what they had done. He said there were many cases where surviving victims met their persecutors and embraced them. They were family.

We are made for goodness, he said. The Truth and Reconciliation Commission brought home to everyone that the people who had done these horrible, evil acts over decades of apartheid were not monsters. They did not, he said have horns or tails. They were people who went to work and came home and hugged their children. Everyday people like you and me, he said, pointing at the audience and himself. Who can honestly state, he questioned, that they would not commit similar acts of brutality when placed into similar circumstances? None of us can, which brings home the expression, “There, but for the grace of God, go I.” We are made for good, he repeated, not evil.

Of the questions afterwards, one in particular stands out. The person asked whether Archbishop Tutu thought that it was possible that the Palestinian question could ever be resolved. He replied, if it can work in South Africa, it can work in Israel and the Occupied Territories.

Another person asked if he had been afraid during the struggle against apartheid, and if so, how he dealt with the fear. He answered that yes, there had been frightening times. Death threats, violence, etc. But he dealt with the fear by asking himself, “What is the worst thing that can happen to me?” And the answer was that he could be killed. He acknowledged that acceptance of that answer required faith that God was ultimately in control, even though we often want to ask God to give some stronger signs that really is the case.

He closed his address by telling the story of a farmer who raised chickens. One of the chickens looked strange–it didn’t look like the other chickens. But the farmer treated it like a chicken, and the creature acted like a chicken. One day, a traveler stopped and saw the chickens, including the strange one. “That’s no chicken,” said the traveler, “that’s an eagle!” “No, it isn’t!” said the farmer. “That’s a chicken.” The traveler finally persuaded the farmer to give him the “chicken”. He carried the creature to a mountaintop and waited for the sun to rise. As the sun was coming up, he lifted the creature up so that it spread its pinions, and he whispered to the creature, “Fly, eagle, fly!” And the eagle flew. And it soared and soared, high and far away.

Addressing the audience, Archbishop Tutu dropped his voice to a whisper and spread his arms. Fly, eagles, fly, he said softly. Fly….

As Kim and I were leaving the Willamette campus, we walked past the clock tower in Jackson Plaza. Kim recalled, with some wonder, that she had stood in the shadow of the clock tower as a lowly Willamette student in 1983 [Ed. note: actually, 1986] to participate in a rally to urge the University to divest from South Africa–one voice among many. After continued pressure from the students, Willamette did divest. And South Africa, a few years later, was freed. Nonviolently. By the sound of many, many voices. And without any bombs.

This entry was posted in from www.heggen.net and tagged anti-war, apartheid, Desmond Tutu, peace, Willamette University. Bookmark the permalink.