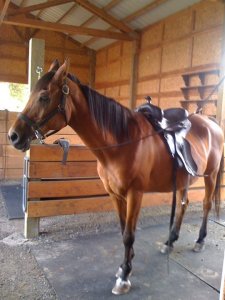 PA Protege (“Bob”)
Bob is Kim’s 22-year-old Arabian gelding. At 14.2 hh, he is a great size for Kim. He is sweet as can be, but he is also quite smart, which tends to lead to interesting things about which to write. He was a surprise birthday present for Kim (from Mike) in 2010.

He was underweight and had some seriously overgrown hooves. His previous owner had some health issues, and I think Bob just became the least of her worries and basically sat in the pasture for several months. He is now happily gaining weight and playing with his new friends at Abiding Acres. His feet are on the road to recovery, too.

He’s a been-there, done-that horse. He has a modest show record in various English pleasure and dressage classes, with some blue and red ribbons to his credit. He has been ridden Western, too, and has even done a little bit of team penning. He doesn’t have any vices except that he can be a bit herd-bound at times. Otherwise, he’s pretty much the perfect horse for Kim. 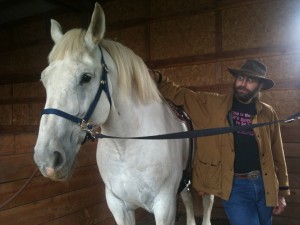 Boulder
Boulder is Mike’s grey Percheron gelding. At 17 hh and about 2000 lbs., he’s not exactly small, but neither is Mike. Boulder is about 15 years old, according to the vet. We don’t know too much about his past because the person we bought him from didn’t get a whole lot of information from the person she bought him from (not even a name), so that’s the end of his history.

We know he’s had training before the seller, but how much and what is something of a mystery. He trailers beautifully, stands tied with extreme patience, is very responsive to voice commands, and has good ground manners. Under saddle, he backs, walks, trots, and canters and has great brakes. He moves off of leg pressure, but is either green at it or rusty, so he does okay at haunch turns, and can sort of do a forehand turn. He can sort of sidepass, too. We don’t know if he is harness trained or not, but we’re going to wait a few months before we test that out.

We are told that he will crib if he is kept stalled for more than a few days at a time, and there is dental evidence of past cribbing. Fortunately, he will rarely be in that situation at his new home.

He was in pretty good health when we got him, except for being out of condition, having a little bit of thrush, and some minor hoof issues. In his first week, he made great progress on the conditioning, so he’s off to a good start. His is a bit distant at first with other horses and with people, but he is slowly warming up to both.